Young ones will love our tea and paint parties, while ART & BLAZE and His Lions feature AP level training for high school. Ask about our mural missions spreading the joy of the Lord through art in major cities all over the world. Starting in the fall Zoom online art classes. Optional AP credit.

Visual Manna has been serving the homeschool community since 1992 with a comprehensive, joyful, and Christ-centered curriculum. We have a program appropriate for every age group.

This quote by Pearl S. Buck, master writer and sculptress is so good! Sometimes creatively gifted students are considered overly dramatic.
“To him…
a touch is a blow,
a sound is a noise,
a misfortune is a tragedy,
a joy is an ecstasy,
a friend is a love,
a lover is a god,
and failure is death.
Add to this cruelly delicate organism the overpowering necessity to create, create, create – – – so that without the creating of music or poetry or books or buildings or something of meaning, his very breath is cut off from him. He must create, must pour out creation. By some strange, unknown, inward urgency he is not really alive unless he is creating.”

The more I research, experience and study in the field of education, the more I believe art education, when taught correctly is the most important catalyst for creative thinking and problem solving. Many of our greatest thinkers of all time were artists. Although they are known for their achievements in literature, science, physics, etc.—their technical expertise and creativity in the arts is amazing. Because we, as Christians, have the greatest message ever given to communicate, the gospel story, our children should be given the best and most effective tools for educational success. More studies are being made and statements by experts given on the importance of art education to the core subjects. I especially like the following statement made by Martin Gardiner in the ABC News article, “Arts May Make Kids More Smart.” “The arts have had an important role from the beginning in providing ways to express things, I am beginning to feel that it is no mistake that the biggest thinkers in history had a greater role for the arts in their lives. If we do not put them at the center of education I think we are robbing ourselves of an important secret weapon.”

Art teaches the creatively gifted child to problem solve independently. It is very important in education to allow children to think and ask and answer questions that have no rote answer. It is important to allow them to put things together that they have not yet put together experiencing the failure and success of the trial of ideas. Sometimes when a child rebels against books and studies, we immediately try to quell the rebellion. Some of our greatest minds had a poor attitude toward books. These great thinkers were not easily led by books and ideas all ready written or discovered. On science books, Thomas Edison said, “They are mostly misleading. I get mad at myself when I think I have believed what was so learnedly set out in them. There are more frauds in science than anywhere else…take a whole pile of them that I can name and you will find uncertainty if not imposition in half of what they state as scientific truth. They have time and again set down experiments as done by them, curious out of the way experiments that they never did. I tell you I’d rather know nothing about a thing in science, nine times out of ten, than what the books tell me. …Professor this or that will controvert you out of the books and prove out of the books that it can’t be so, though you have it in the palm of your hand and could break his spectacles with it.”

Leonardo da Vinci’s manuscripts frequently relate his opposition to the bookish learning of educated men content to be wise at second hand. He says they are strangers to the custom and desire of those who write well to return to the source, which is experience, namely nature itself. It was obvious that he did not copy his flying machine, crossbow, or submarine ideas from any books. He would certainly have been a difficult student easily bored with traditional educational fare. For more information on Leonardo da Vinci, go to the book Leornaro da Vinci, printed in Italy and copyrighted by Instituto Geografico de Agostini, S.P.A.

Charles F. Kettering, the inventor of the electric ignition, said,”A study made a number of years ago said the more education a man has, the less likely he is to be an inventor. Now the reason for this is quite simple. From the time the boy, or girl, starts in school he is tested three or four times a year and , of course, it is a very disastrous thing if he fails. An inventor fails all the time, and it is a triumph if he succeeds once. Consequently, if education is an inhibition to invention, it is due entirely to the form by which we rate things and not because of any intellectual differential.” Art allows students with particular learning styles to connect with core subjects such as science. It allows students to try and fail and come up with new ideas. Students, see that many different styles are considered quite good. They soon get the idea that there is more than one way to do it right, and that it is ok to experiment. Artistic experimentation produces a student who is confident about their own original ideas and creativity.

There is a strong connection between art and science. In America alone, many of our greatest inventors and scientists were also great artists. C.W.Peale, the great portrait artist, was an enthusiastic naturalist and founder of the first natural history museum. The great naturalist Audubon a leading observer of nature drew various species of birds. Robert Fulton studied painting with the great Benjamin West and was considered the Leonardo da Vinci of America. Samuel Morse was the inventor of the telegraph and a wonderful historical artist. George Washington Carver was also a gifted artist, drawing pictures of the plants he loved so much. These scientist’s achievements in art are overshadowed by their success in science.

Some time ago, Paul Dirac, the creator of the complete theoretical formulation of quantum mechanics, had this conversation with J. Robert Oppenheimer, the father of atomic bomb. “I’ve heard that you were also a poet?”

“That’s amazing,” remarked Dirac, “poets use languages in their unprecedented ways to describe feelings shared and understood by all, while physicists are just the opposite, we try to use the language in the way accustomed to everyone to expose the new discovery known to none. How could you be the two at the same time?”

With the same question in mind, a reporter interviewed the world renowned physicist Dr. T.D. Lee in June, 1995, while he was giving lectures in Beijing. “There is no need to reiterate Dr. Lee’s achievements in science here; his knowledge in art commands the same respect. Dr. Lee can tell with great accuracy… the sites of discovery, years of production and even original from imitations of some ancient Bronze-wares, china-wares that have been unearthed all over China.” Chinese Science News _ Overseas Edition, July 25, 1995.

There is an interesting book entitled Doubly Gifted: The Author as Visual Artist by Kathleen Hjerter. It has photographs of paintings and drawings by famous authors including William Blake, Victor Hugo, Edgar Alan Poe, Harriet Beecher Stowe, William Makepeace Thackeray, Henrik Ibsen, Oscar Wilde, Pearl Buck, T. S. Elliot and many more. They were gifted with the ability to communicate visually as well as verbally.

Art can be incorporated in much of the core academic subjects. When we study math we can use geometrical forms, tessalations and any variety of visual estimation problems to connect with art. We can study symmetry in nature. The study of art history is a history course in itself as paintings and sculptures reflect the times in which they were created. If your child spends time drawing and creating, this is a wonderful thing. Instead of steering them back to the workbook, as would most certainly be done in the classroom, we can encourage them to approach these core subjects from new perspectives stimulating new ideas through drawing, painting and the creative process. When we consider teaching children who are entering the twenty first century, let us first comprehend that problem solving, inventing, and the arts should be a priority—and be amazed at the phenomenal results such an approach will bring!
Any of the Visual Manna products work well with children who are gifted creatively because they allow students room to be individuals and be creative. 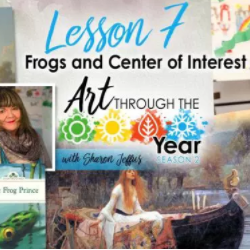 Check out our educational products HERE! 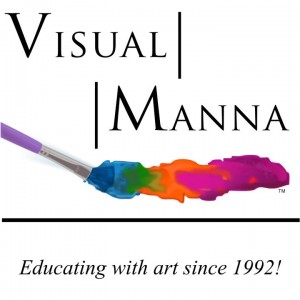